"Snail catches the winning touchdown pass in a David and Goliath game between two comically mismatched teams: Elephant, Rhino, Moose and friends vs. the likes of Dog, Snake and Mouse. Funny, colorful ink and wash cartoons. Extremely simple, but attractive - because of its subject and humor."
*Starred Review, School Library Journal*

"A sequel to 'Hooray for Snail!" epitomizes the merriment that can be packed into a minimum of monosyllables and pictures with screaming bright colors showing the fraught seconds in a football game. Team captain Dog talks to his "men": Rabbit, Mouse, Canary, Snake and other small types lined up against Elephant, Giraffe, Alligator, Bear and fellow giants. "Dog has a plan.", "I will throw to Snail!" But where is Snail? Home in bed. While the big players are clobbering his mates, Snail awakens. He knows he's late but has to proceed at his agonizingly slow pace (dressing, brushing his teeth, eating breakfast) before driving to the game. At the last minute, "Snail wins the game", in Stadler's different, delicious treat for beginners."
*Publishers Weekly* 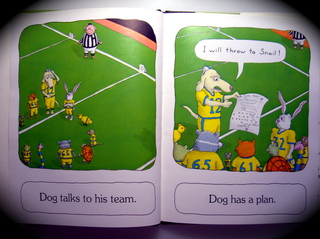 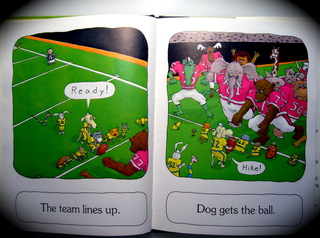 Dog will throw to Snail. 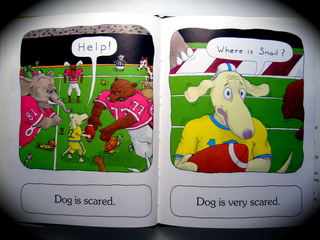 But where is Snail?